Former U.S. Ambassador to the Republic of Korea 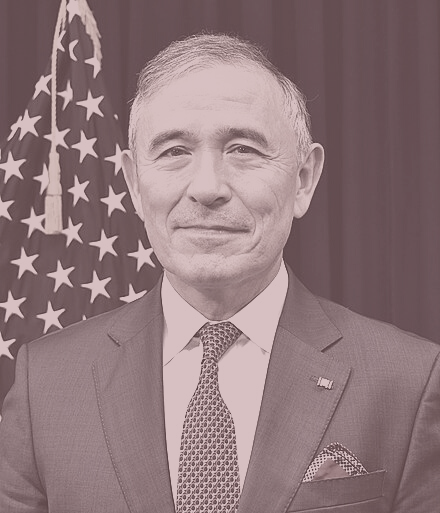 Admiral Harris served as the U.S. Ambassador to South Korea from July 2018 to January 2021. He served 40 years in uniform, retiring on 1 June 2018. The first Asian-American to hold 4-star rank in the U.S. Navy, he commanded U.S. Pacific Command, U.S. Pacific Fleet, U.S. 6th Fleet, Striking and Support Forces NATO, and Joint Task Force Guantanamo. He participated in numerous combat operations, including Desert Shield/Storm, Enduring Freedom, Iraqi Freedom, and Odyssey Dawn. He has flown over 4400 hours, including over 400 combat hours.

From 2011 to 2013, Harris served as the representative of the Chairman of the Joint Chiefs of Staff to Secretaries of State Hillary Clinton and John Kerry.  He also served as the U.S. Roadmap Monitor for the Mid-East Peace Process.

He has been decorated by the governments of Australia, France, Japan, Korea, Mongolia, the Philippines, and Singapore, and has been nationally recognized as a champion of diversity.

Born in Japan and reared in Tennessee and Florida, Harris graduated from Annapolis and holds master’s degrees from Harvard and Georgetown.  He did post-graduate work at Oxford and completed the Seminar 21 fellowship at MIT. He is a member of the Council on Foreign Relations.

All sessions by Harry Harris

The Future of Indo-Pacific Strategy